Arctic Moves is a good platform game that puts you in the role of a futuristic commando sent to infiltrate terrorists' bases in the Arctic. Although the gameplay is no diferent from a zillion other platform games, the Arctic settings, tough enemies, and cool futuristic weapons and power-ups make Arctic Moves stand out from the crowd. The game is in Spanish, but hey, it *is* an action game where talking is mostly done with guns and bullets :) For a more plot-oriented and innovative Dinamic game, check out Narco Police, also on this site. 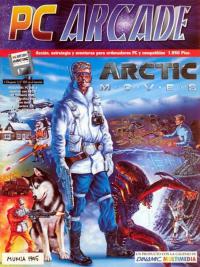