Review 1: Fun sports at its best made this game a true classic on the C64. The PC-version looks pretty much like a 1:1 clone. Looks like they even emulated the same resolution, hey - EGA is able to do it better, isn't?! Anyway, still ok to look at and lots of fun. I especially enjoy Footbag and Surfing, BMX isn't bad either. There are other events of course. Put together nicely so you can compete in all of them or only at some of them. Really a nice thing they did back then.

Review 2: Epyx' breakthrough game is one of the most fun and timeless games ever made. Everything a sports fan could ever want is here: refreshingly unique concept, outstanding graphics, intuitive interface, and amazing variety of moves, tricks, and secrets to discover. Sports include Half Pipe, Surfing, Foot bag, Skating, BMX, and Flying Disk. Playing California Games is enough to make even the most jaded couch potato want to put on a pair of rollerblades and hit the beach-- it is that good :) Simply one of the most addictive games ever made. Surf's up!

Review 3: You can play this game in all kinds of resolutions, CGA, EGA, Hercules, VGa, etc. The game has lots of options, you can skate, snowboard, and a lot more. I don't think there is sound in it. The graphics are bad. I don't like the game, but maybe you do!

Review 4: California games can be compared to the Olympics, a collection of events you compete in (on a not so grand scale of course!). You can compete in sports events such as skateboarding, footbag (hacky), surfing, roller-skating, frisbee and BMX. I have to say that my favorite event of the game was BMX. I could do forward and back flips, plus all kinds of neat tricks, and actually make it to the end of the track. It was so much fun, dodging logs and rocks and things that looked like dead people but probably weren’t. Second was the surfing, now that was fun, I was getting pretty good at that too, the panel of judges giving me great scores! Footbag was another one that was great! I liked trying to hit the seagull that was flying around above me with the footbag :D Roller-skating was fun, the guys whistling at you as you skated past, and then you fall on your ass because you keep tripping over stuff. It was a great game! Wow, I see that I only like things I’m good at well don’t try telling me that you are any different. The things I was bad at, or didn’t like were the skateboarding and frisbee. I was completely lame at both. In the skateboarding, I always ended up going up one side, then up the other then not as far up the first, even lower on the next side, slowly ebbing down into a standstill, then falling on my bottom. You get the idea ;) I just couldn’t make that damn thing move! The frisbee, well I always jumped in the opposite direction and all through my years of playing this game, I only caught the damn frisbee once! The sound and graphics were great, especially for a 1988 game. Just your average PC speaker sounds, but when you hit the seagull * giggle *. The game was great to look at, you weren’t hindered in your events by crappy graphics, like some games have. I thoroughly recommend this game! Hours and hours of fun are in store for you if you give it a shot, its so much fun! 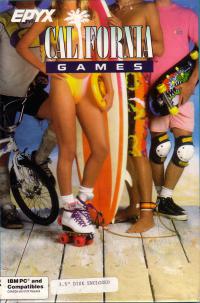