A decent PC conversion of hit arcade game by SEGA, Alien Syndrome is an addictive top-down action blast. Like the arcade game, there is a two player option, which has the obvious advantage of doubled killing power, but you have to be very wary, because letting rips with fatal weapons rubs out your partner with just as much efficiency as it does the mutants. Scattered around the playing area, behind special panels, are weapons galore; a flame thrower, a bomb launcher, a lazer, a fireball flinger, and the inspiringly named 'options' which tag onto you and guard your behind, firing when you do. Only one weapon and two options can be held at a time, which is annoying. There are loads of scientists scattered around the first level (shown on the score panel as companions); find ten and you can progress to the next level (leaving the rest behind to a slow sticky death - sick!). Here the scientists become harder to find, and the aliens are slightly more bent on killing you! The exit from this level leads into another room in which floats a vile and vast mega-monster who does his very best to wipe you all over the floor. These fairly disgusting entities are portrayed beautifully with liberal use of colour and pretty animation, something which is missing from the main part of the game where the figures are tiny, and the quarter scrolling (where the screen only moves when you get close to the edge) can create problems when you're dangerously close to hundreds of mutants just off screen! Despite the several quite minor problems already mentioned, Alien Syndrome is a wonderful romp through some great carnage. This romp is made far more enjoyable by the two player option, although it would have been nice if the two players were impervious to each other's fire. It does make the game more challenging, though. 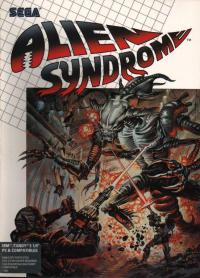 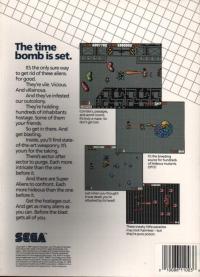