Eye of the Beholder

Ancient Art of War in the Skie..

Alien Trilogy is a lackluster first-person shoot 'em up that is a disappointing waste of the blockbuster license. Very loosely based on the three existing Alien movies, the game casts you as Ripley, space marine heroine who is sent with fellow marines into the colony on planet LV246 to discover why communication has been lost. Of course, the menacing Aliens are behind it, but the story thankfully takes a few twists and turns along the way - albeit not in unexpected directions. Alien Trilogy offers about 25 levels, split into 3 parts similar to DOOM episodes. The first part take place in the colony from the movie, the second in the prison colony taken from Alien 3, and the third and final part takes place in the alien ship filled with nasty eggs that we all remember so well from the first movie. Although released a few years after DOOM, Alien Trilogy looks and plays much more like DOOM than contemporary games like Quake or Duke Nukem 3D. The graphics are only passable - the aliens and wall textures become horrendously pixellated when you get too close, and sometimes it is difficult to distinguish scenery from objects you can interact with. You are given an objective at the beginning of each level. These range from killing all Aliens in sight, to collecting identity tags, activating lifts, and others. However, you can finish the levels without finishing any of these objectives - just make your way to the exit and hop into the lift. This makes objectives redundant... I suppose they are there only as "additional challenges" to die-hard action gamers. Even die-hard movie fans will find Alien Trilogy thoroughly boring. Even the Alien DOOM .WAD some fan created years ago plays much better than this average game. Acclaim could have done a much better job. If you want a fun and appropriately scary Alien game, play Sierra's superb Aliens vs. Predator series instead and leave this one alone. 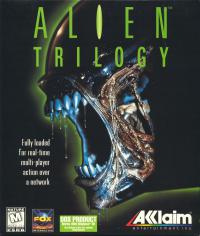 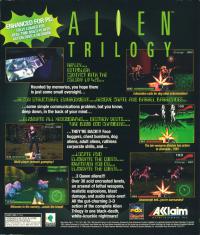