Dark Ages I- The Continents

Review 1: It is a time after a great war. The world that we know is wiped out and a new race has emerged - the mutants. They differ from humans only by the way they look, but are rejected and hated. Now, the humans have decided to completely wipe them out, and You (as one of the three provided characters) are being sent by the Mutes to be the first one to strike - the best way to defend is to attack! Very good action/arcade game by Origin, the father of the well known Ultima and Wing commander series.

Review 2: Bad Blood is a mix between an arcade and action game. Origin has tried to offer a great story but still with several things taken from a regular arcade/action game. Sadly they haven't done well and the game has ended up with a few good parts of both things but sadly too many things making the game "another" action game without too many challenges or new ideas. The world is about to be taking over by some kind of mutants and you (of course you) will have to fight these evil creatures. The idea is not new but some reason we never get tired of this idea (although I did in this game). You start the game by running around killing these mutants with a knife. Later on the game you get better weapons and you can also collect other things that will help you in the game. But you can do other things as well like examine as an example which makes the game a bit broader since it isn't only killing, collecting, killing etc. all the time. The graphics are quite good in the intro like many of other Origin titles like Wing Commander 1 and Ultima 6. In the actual game they are way less detailed and kind of disappointing after viewing the intro. Not an impressive game but still worth trying.

Review 3: Finally it happened: the devastating nuclear war. Only few human beings survived and now dwell in destroyed cities holding up the last remnants of civilization. But they haven't been the only survivors - some mutants also survived. Poor creatures who suffered from radioactivity, mutated into various kinds, always fleeing from the "normals", because one thing mankind still hasn't learned: helping each other. Instead of working together, they brutally enslaved the mutants - only few have been able to get away, now living in small towns. But danger isn't over - rumors are spreading that the "humes" are planning a war and you are setting out to learn more. The atmospheric graphics underline the story of this game, set up in a postnuclear time it hooks you up within minutes. Everyone who likes the Mad Max-movies will feel at home here. The interface is simple, reminding a bit at the newer Ultimas (who would have thought that - this is an Origin-Game too).

Review 4: Bad Blood may well have been Origin's first RPG that tried to appeal to the action crowd by offering action-based gameplay and minimal statistics. It didn't quite succeed on that count mainly because the action sequences are quite repetitive and the enemies too easy to dispatch (by simply lining them up in your line of sight and keep pressing the fire button as they make no attempt to dodge the bullets). However, the game also has plenty of charm on its own: but the plot and NPCs are interesting enough to warrant a play-through.It's also worth a mention as one of the first games Wing Commander designer Chris Roberts designed for Origin, and his knack for creating cinematic moments is apparent even at this early stage. Note: This download is the 1994 re-release version, which features updated 256-color VGA graphics and other cosmetic enhancements. 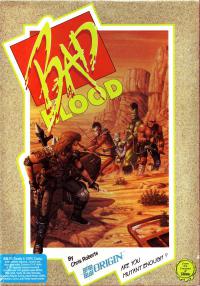 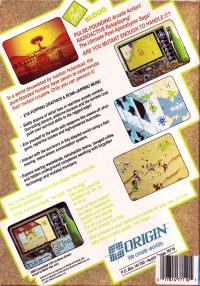