Review 1: One of the best Hardcore-Strategy-Games I ever came across. It somehow reminds me of a Heroes of Might & Magic set in ancient China (of course it was made before HoMM). You can hire heroes have to keep an eye on your people, care for your finances. Politics as well as economics combined with strategy and even some RPG-elements. When I started this game to have a quick look at it - not expecting too much - I was hooked for some hours. The simplistic controls are easy to manage and then you try your best to gain more influence. Very realistic gameplay and a nice story make this one a high-quality game for all Strategy-Fans.

Review 2: Close to 600 years after the events chronicled in KOEI's better-known Romance of The Three Kingdoms,the weak royal court inspired the rise of legendary bandits who proclaimed themselves kings. This game is best described as a more difficult RTK, because although the setting and gameplay remain the same, you start out in exile and must fight many stronger opponents. Personnel management and resource allocation, therefore, become much more important here. A good game, if little differentiated from RTK. 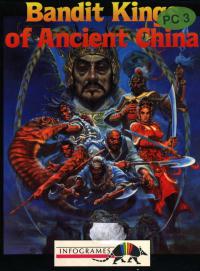 Enter the code to download Bandit Kings of Ancient China.