Review 1: I can't remember how many times I have played this game on my Commodore 64 and Amiga but it has been more than 1000 times through the years. Barbarian isn't a very complicated game - all you have to do is to kill your opponent in a sword fight. The game came at the same period as the Conan movies staring Arnold Scwarzenegger and for me it also looks like the character you play as it developed from the Conan character (the movie was called Conan: The Barbarian after all) and your characters has as many muscles as Arnold Scwarzenegger as well. As mentioned all you have to do is win the fight. But the game doesn't just offer 3-4 different moves. Not only can you kick, jump and roll around. You can also swing the sword in one hand while it jumps from finger to finger. Things like swinging the sword after turning around yourself to get more power in the blow is included as well and my favourite move is to chop of the head of your enemy if you succeed in this move. After the battle ends a small goblin is entering the scene carrying away the character that died. And if the head was chopped of the goblin kicks the head out of the screen view. I love that feature. After each battle you will of course meet an even tougher enemy but once you have played the game a little you should be able to reach one of the last few enemies. The last one can be a bit tough even for the very experienced player though as it sometimes feels like the computer just wants to win no matter what. The graphics are actually well done compared to the age of the game and especially when I played the Amiga version the sounds were great with an evil laugh when you die and the different sounds when you fight like when you parry a blow or kick someone so they fall to the floor. Some parts of the graphics can be a bit hard to place as they are placed on each other mixing up the different things a bit but it doesn't affect the gameplay at all. Really a nice game to spend some time on when you have nothing else to do or just want to hit something.

Review 2: If nothing else there's one thing you can say about Barbarian: It has the most stupid controls in history! Seriously - they're about as intelligent as a piece of toast. Thinking again... not even that. Imagine controlling a nice good old style hack 'n slay sidescroller with only the function keys! Or well - you can also do it with the mouse. Don't even TRY to control with the joystick because it will NOT have the desired effect - you can only use the joystick to control the mousepointer. This is very sad as the game sure got some atmosphere and apart from the controls it's not even bad. Just 100% unplayable. Try it if you got some serious amounts of Guinness inside - you might not even notice that this is next to uncontrollable. It starts off nice with digitized speech and all (which some of you - like me - will probably not be able to hear on their modern computers). Oh and don't make the mistake of taking this game for the predecessor of Barbarian II - the first part of THAT game is named Death Sword on the PC, it's C64 release had the name Barbarian though. It's not in any way related.

Review 3: This is actually a game I played the original of on the Amiga when Palace Software were churning out similar titles and, not meaning to offend any PC fans, the Amiga version is a lot better than the one here. That said though, its still a fan little game to anyone who is a fan of the wooly-pants slash-em up genre and has a few elements in it that have never really been repeated in games since. You can decapitate your opponent with a single blow. That's right kiddies, pressing back and fire on that joy stick launches your wooly-panted, mulleted barbarian into a death blow spinning chop with Conan-esque style. If the attack lands clean, the head of you opponent will bounce away for a little goblin to kick around while dragging away the body. Just for this alone the game is worth a try although I wouldn't go expecting A-grade beat 'em up action, although it is fun to sit down with a friend and try to see who can decapitate first. A five minute amusement. Though if you're looking for a similar game with better AI and strategy (blood too) I'd recommend Moonstone for both single and multiplayer. 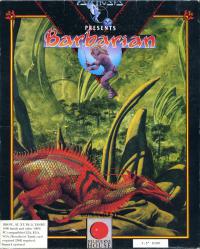 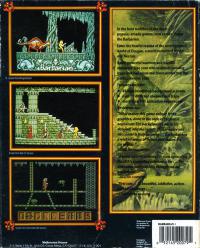