Blue Max- Aces of the Great War is currently download only.

Review 1: This is one very unique game! Yes, it is a World War I flight simulation, but it’s even more – a turn-based strategy game with planes only! You can select the game mode yourself, so if you are a good strategy player you can play in strategy mode or you can fly the plane yourself and show your skills as a pilot. You can also play Blue Max in a single player mode or in a split screen two player option. You can also play the campaigns and since there are two sides (Axis and Allies) there are many opportunities. Blue Max is a good simulation but it still lacks something to make it a true legend.

Review 2: Another averageflight simulator. You start the game by selecting what plane you want to fly in and options like controls weather etc. You can play two players in the game and play campaigns as well. Of course you can also practice flying with every plan available and also try out the different game modes. The game takes place during the second world war but I guess that's not very surprising after all. An average word war simulation game with average gameplay.

Review 3: Blue Max is a fun World War I flight sim that features interesting campaigns with a variety of missions ranging from standard bombing runs to executing aerial maneuvers. The game boasts crisp VGA graphics, smooth animation, and responsive mouse and joystick controls. Register your pilot and watch his career develop on either side in the conflict. All in all, an excellent sim that's not Red Baron caliber, but is still entertaining in its own right. 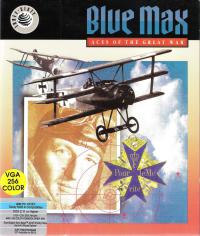 Blue Max- Aces of the Great War Box Artwork Back 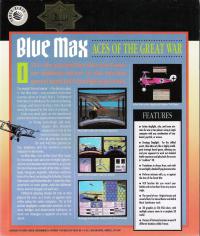 Enter the code to download Blue Max- Aces of the Great War.